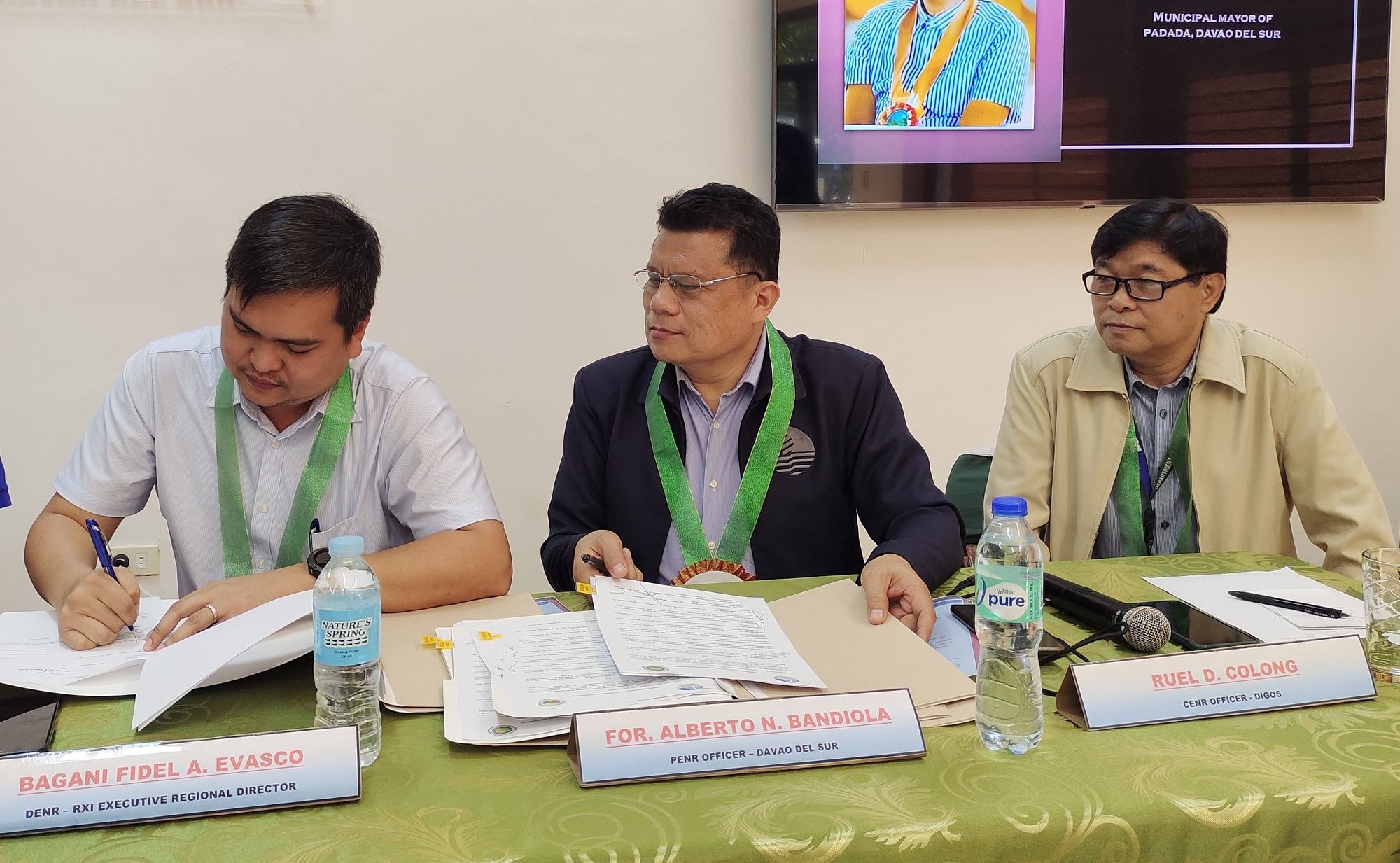 Following the pilot implementation of the Rapid Land Tenure Appraisal (RLTA) in Davao del Sur particularly in the Municipality of Bansalan (2019), and the City of Digos and Municipality of Matanao (2020), the DENR XI, through its PENRO Davao del Sur Field Offices particularly CENRO Digos spearhead another round of collaboration with the province’s three (3) other municipalities afresh the drive for mass titling.

The said forging of joint effort was sealed through a Memoranda of Partnership Agreement (MOPA) between the DENR and the Municipalities of Magsaysay, Padada and Hagonoy, all in Davao del Sur which was held at the DENR PENRO Davao del Sur Conference Hall on December 5, 2022.

Previously, CENR Officer Ruel D. Colong of CENRO Digos City together with PENRO Alberto N. Bandiola of PENRO Davao del Sur conducted the close coordination with the Local Chief Executives of the aforesaid municipalities, with which the leaders’ commitment and cooperation were already secured even before the MOPA signing, ensuring that the RLTA would be grasped by stakeholders critical to its implementation.

Further, DENR XI Regional Executive Director Bagani Fidel A. Evasco shared a brief background of the RLTA to the participants and how it was started until it became a program and a strategy adopted by the DENR in intensifying land titling in partnership with the LGUs.

RLTA is the process to obtain a clear picture of the land tenure situation on the ground before land titling operations are entered into the area (Land Management Bureau Technical Bulletin No. 1 series of 2018). It is intended to determine the approximate workable lots in a particular area, to identify the remaining scope for the acceleration of land titling and to update the cadastral surveys.

Hon. Ronie Sarande, Municipal Mayor of Magsaysay commended the DENR XI in initiating and continuing the program and for extending a hand towards bringing this service closer to the people.

On the other hand, Acting Mayor of the Municipality of Hagonoy Jesus S. Dureza, Jr.,says that it is “wise of the DENR to elaborate this program.”

“[We] newly elected and appointed mayors of our towns are eager to implement projects which can ensure that our constituents will be greatly benefitting from, especially those from partner National Government Agencies,” Hon. Dureza jr., added.

Mayor Frashale L. Guerrero, Jr., of the Municipality of Padada likewise concur that land tenure is important for people to acquire as in their experience, even government properties can be jeopardized when land titles are not awarded and can hamper in the delivery of public service.

The MOPA signed by DENR XI with the three municipalities in Davao del Sur is expected to realize its objectives during the early quarter of CY 2023, when massive patent drives and orientations jump starts.| 𝐶𝐸𝑁𝑅𝑂 𝐷𝑖𝑔𝑜𝑠 𝑣𝑖𝑎 𝐶𝑦𝑙𝑙𝑒 𝑀𝑎𝑟𝑖𝑒 𝑆. 𝑁𝑎𝑑𝑜𝑛𝑧𝑎