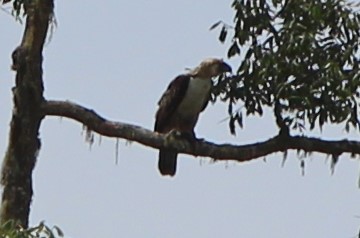 A first sighting of Philippine Eagle (𝑃𝑖𝑡ℎ𝑒𝑐𝑜𝑝ℎ𝑎𝑔𝑎 𝑗𝑒𝑓𝑓𝑒𝑟𝑦𝑖), the world’s largest and rarest raptor, has been recorded soaring in the wild of Maragusan, Davao de Oro particularly in Mt. Candalaga, a range that was contemplated to be added on the list of protected areas in Davao Region.

Conservationists from PENR Office of Davao de Oro particularly its CENRO Monkayo report that they already had initial observations of the presence of said elusive and critically endangered species during the early days of October of this year.

Subsequently, the team conducted an actual verification survey and indeed, in an auspicious morning of October 12, at around 10:55 o’clock and with an elevation of approximately 1200m ASL, the group witnessed the majestic bird of prey hovering in the forest canopy of Mt. Candalaga Range and was also sighted perching on a forest tree.

The team is in close coordination with the local government units, including the Municipal Environment and Natural Resources office through Mr. Ferdinand E. Bautista alongside Brgy. Capt. Maritess M. Gran regarding the sighting. Said joint effort aims to strengthen the forest protection campaign against forest violators and to augment enforcement of protection and conservation methods in Mt. Candalaga especially with the presence of the country’s national bird in it.

Mt. Candalaga stands at 2100 meters above sea level and is among the untouched natural forests in the region. It can be recalled that the DENR XI team, led by RED Bagani Fidel Evasco, conducted a reconnaissance climb in the said mountain in the early months of 2021 in aims of adding it in the list of protected areas in the region and for its inclusion in the National Integrated Protected Area System (NIPAS) (see https://tinyurl.com/Mt-Candalaga).

The” Haring Ibon” sure tells a sign that Mt. Candalaga can be its “home”. It as well curtails entry from public as trekking and mountaineering activities is not allowed in the said mountain.

The DENR-XI through its conservationists and forest rangers will continue to put its best foot forward in safeguarding and conserving Mt. Candalaga and all the wild life species that inhabit in it, most especially the Philippine Eagle.