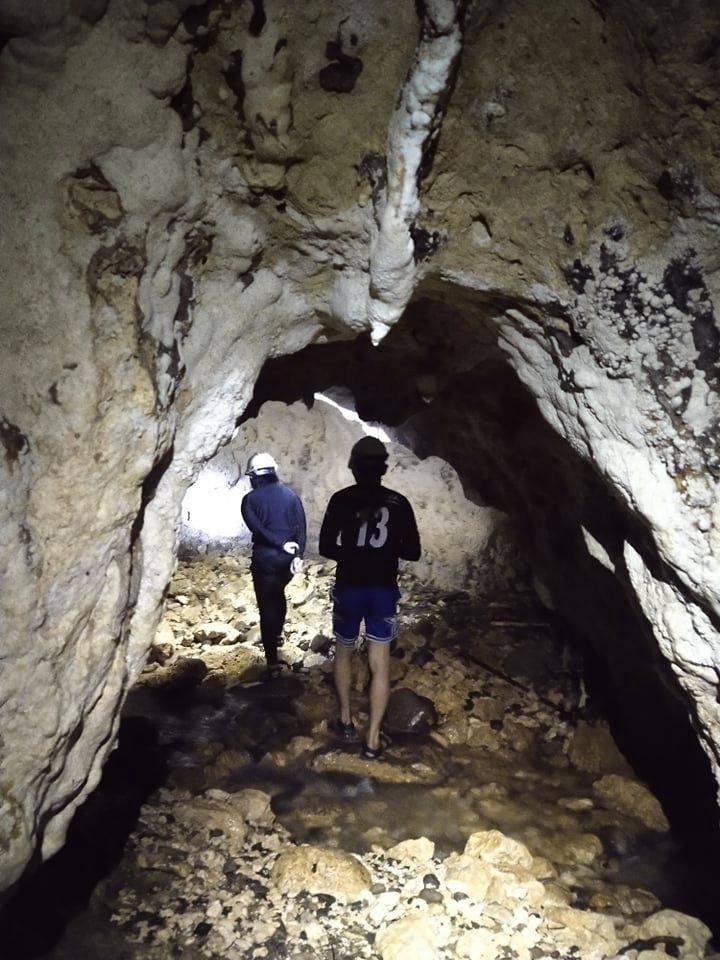 Recognized as among asset natural resources for their uniqueness and wonder, let alone its historical, and ecological value, caves have become venues for scientific studies and discoveries in the past years- a resource best championed by CENRO Digos City.

Tagged as typically dark, cold and a home to bats- but more than that, caves play multiple key roles in determining and sustaining a healthy environment. They’re vital in groundwater movement likewise a habitat for threatened and endangered animal species.

The explored caves in Matanao included the Fyingi Sol Cave (Class III) and Su’bon Cave (Class II), two sets of caverns known to be ecotourism sites at the locality, providing an alternative albeit sustainable source of livelihood for the communities surrounding them.

The Fyingi Sol Cave/Swiftlet Cave (Sol is a B’laan word, the local settlers in said area) is known for its narrow, tight and challenging entrance is 78 meters long, with dome walls and several cave formations observed. Su'bon Cave, unlike the other, is moderately submerged with water, and is 198 meters deep, having larger calcite formations. Su'bon, further, means "foul odor" coming from feces of bats, a smell that one can get a whiff of inside the cave.

As you do your spelunking/caving, your eyes will wander on the various formations in it. Speleothems droop from the ceilings like icicles, emerge from the floor like mushrooms, and cover the sides like sheets of a waterfall. Speleothems form as the carbon dioxide in the acidic water escapes in the airiness of the cave and the dissolved calcite hardens once again.

Other formations observed inside the caves are the icicle-shaped formations called stalactites which form as water drips from the cave roof. The other formations most commonly found in other caves, Stalagmites grow up from the floor/ground, usually from the water that drips off the end of stalactites. Columns form where stalactites and stalagmites join. Sheets of calcite growths on cave walls and floor are called flowstones. Other stalactites take the form of draperies and soda straws. Twisty shapes called helictites warp in all directions from the ceiling, walls, and floor.

Since the implementation of Caves Management and Conservation Program in 1994, over 1,500 caves have been recorded by the DENR, to which, hundreds are in Davao Region. There had been over a thousand that were assessed, listed, mapped and classified, there could be a thousand more out there. Nature’s a true wonder, after all.

The DENR will unceasingly explore and assess caves across the country and will propel for its protection and conservation, like all the other natural resources gifted to the Philippines. | 𝑣𝑖𝑎 𝐶𝑦𝑙𝑙𝑒 𝑀𝑎𝑟𝑖𝑒 𝑆. 𝑁𝑎𝑑𝑜𝑛𝑧𝑎

Earth Day: A good day to plant a tree 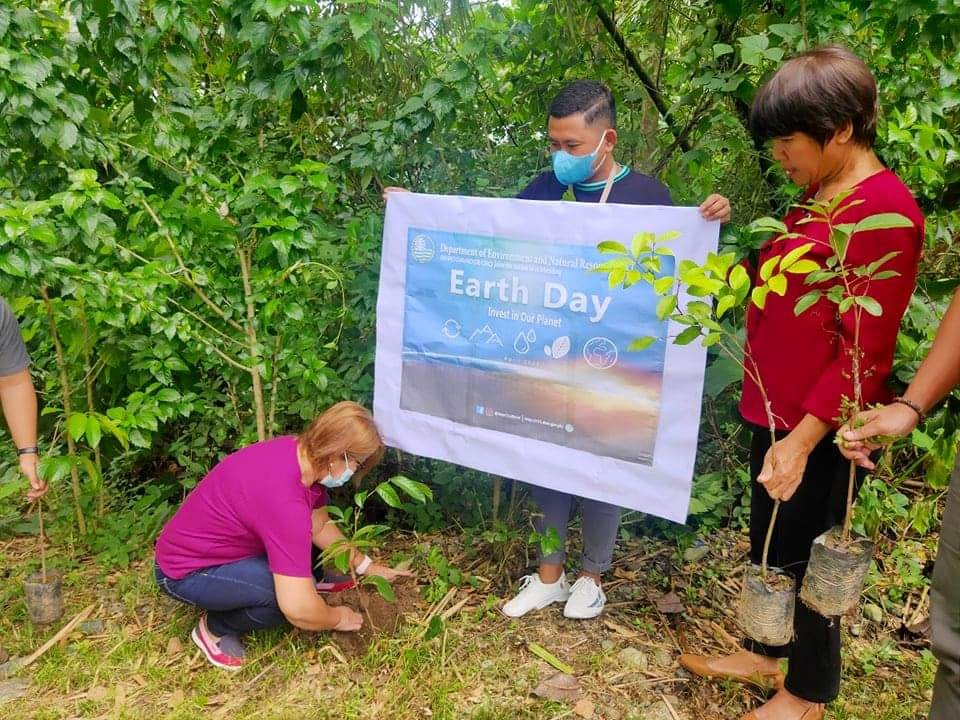 This year’s celebration banners the theme “Invest in our planet” which appeals to everyone and all sectors to join the call to change the business climate, political climate and how we take action on climate [change].

Earth Day originated as an environmental revolution on April 22, 1970, which was led by the then US Senator Gaylord Nelson to push environmental protection on the national agenda. Such action led to a global campaign advocating for collective protection and preservation of our planet.

As to PENRO Davao de Oro, the best way to give justice to this celebration and to put this year's theme into action is to plant trees as this is yet the best way to buy us time while we're determining other effective ways to combat climate change.

“Tree planting is just one of the many ways we can contribute something good to our planet, and as we celebrate Earth Day, we call on every citizen to reflect on our actions and choices towards the environment as these will have a domino effect on our planet whether beneficial or detrimental. We should always think, choose and act the right way towards achieving a clean and healthy planet,” said PENRO Gunn. | 𝐶𝑀𝐶𝑙𝑒𝑜𝑓𝑒 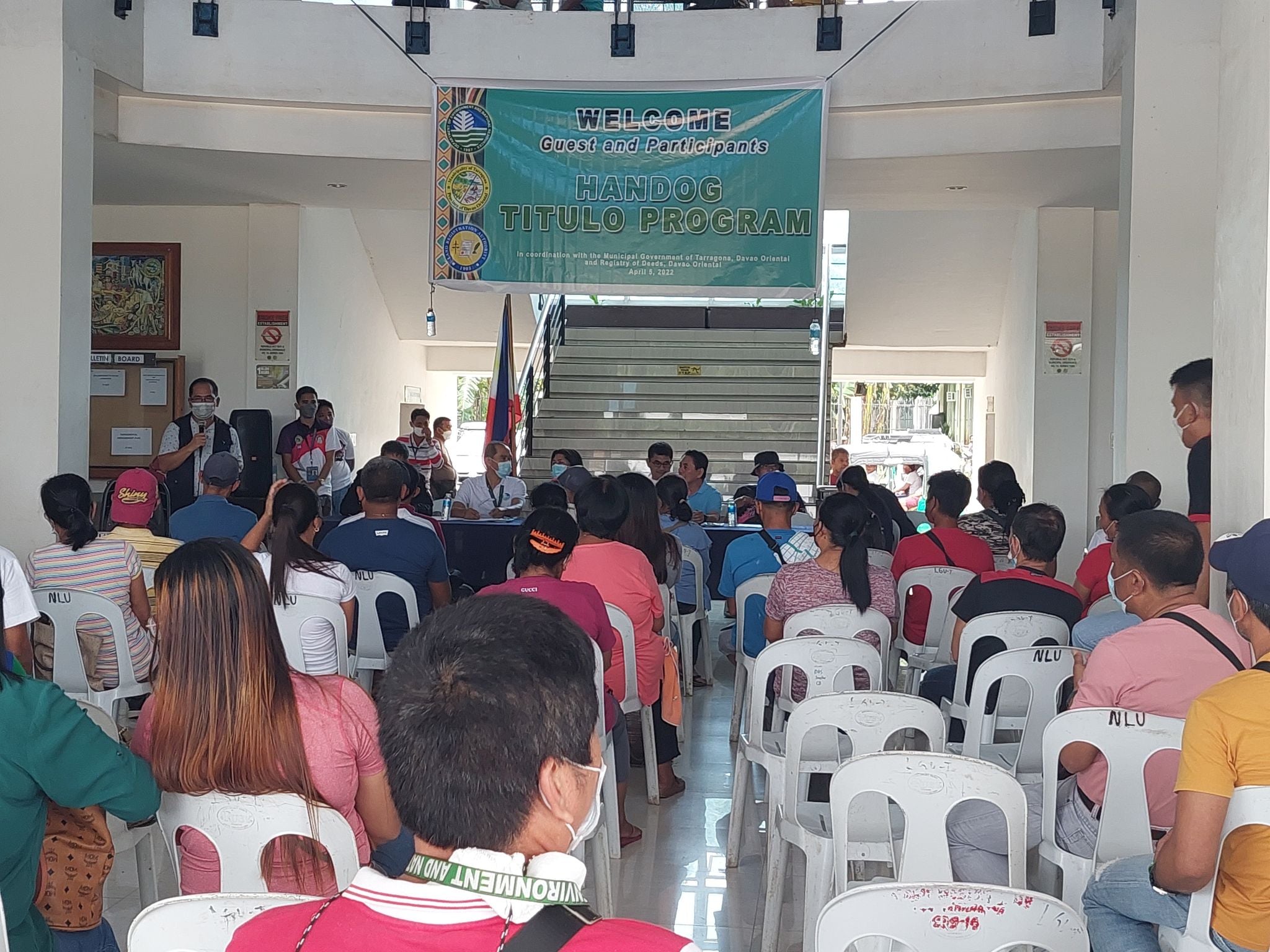 PENR Officer Pablito M. Ofrecia underscored the priority thrusts and programs of the Department specifically on the Improved Land Administration and Management which aims to bring the land management services closer to the people. PENRO Ofrecia illustrated further that the said program aims to fast track the process and eventual issuance of Certificate of Title.

In the Municipality of Boston, 315 are from Brgy. Caatihan, 7 from Brgy. Cabasagan, 2 from Brgy. Poblacion, 8 from Brgy. San Jose, and 12 residents from Brgy. Cauwayanan received their Certificate of Land Title with a total of 344. Mayor Rowell Rosit of Boston who was represented by Vice Mayor Rosalinda Adalim also shouldered the fees of the recipients.

In the following days, another batch of distribution shall be conducted to other municipalities of Davao Oriental. It is expected that a total of 829 titles shall be awarded to the land owners of the province by the end of this Handog Titulo Program FY 2022. 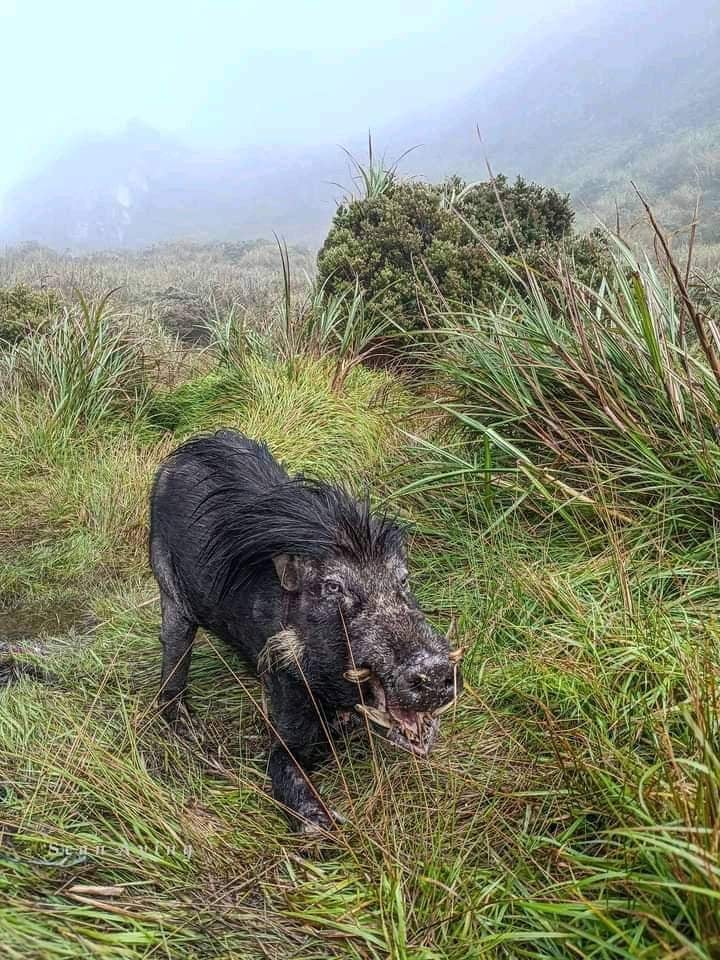 In April 11-17, 2022, several personnel from the Department of Environment and Natural Resources XI surveilled the premises particularly the established trails and the peak of Mt. Apo Natural Park (MANP) within Davao Region for its annual Lenten climb monitoring.

The composite teams from the DENR Regional Office, the PENRO and CENROs of Davao Del Sur and in collaboration with the LGU and PAMB partners established monitoring teams that manned the designated entry points, trails and campsites within MANP to ensure enforcement of its trekking policies.

Measures include verifying the climbing permits of the trekkers and checking on their adherence to the zero-waste policy where all visitors are required to bring down their own garbage. The team also observed the trekkers’ compliance to the IATF guidelines for outdoor recreational activities likewise to the mountaineer’s creed as stipulated in the Protected Area Management Board’s (PAMB) unified camping and trekking policy.

The teams roamed around Tamayong, Bansalan, Digos City and Sta. Cruz Trails and entry points. The Colan-Sta. Cruz Trail, however, was suspended for the Holy Week while Tamayong Trail in Davao City is permanently closed in deference to LGU-Davao City’s policy.

The teams also recorded a direct sighting and encounter of the endemic 𝑆𝑢𝑠 𝑝ℎ𝑖𝑙𝑖𝑝𝑝𝑒𝑛𝑠𝑖𝑠 or Philippine Warty Pig indicating the progressive natural recovery of the peak area with its presence. Although protected by the Philippine law, these wild pigs, locally known as “baboy-ramo or baboy-ihalas”, are categorized as vulnerable due to its decreasing population. If the said threat worsens, they may soon be listed as endangered.

We would also like to remind the trekkers to keep distance from wild animals and refrain from feeding them so as not to lose their [natural] instinct to independently hunt for food. 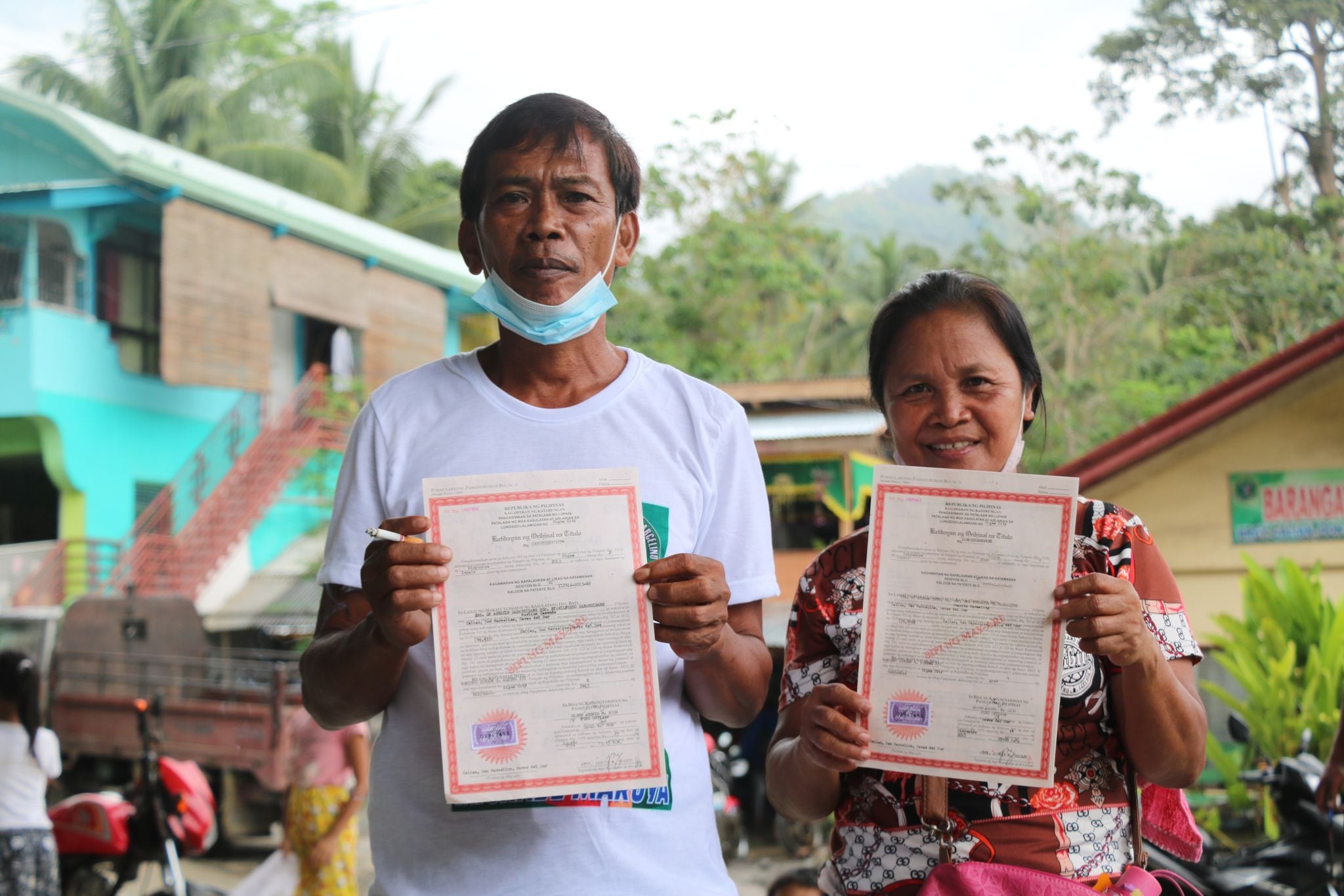 Through the collaborative effort of DENR-PENRO Davao Occidental and the Registry of Deeds of Digos Davao de Sur, Handog Titulo Program was successfully conducted in several barangays of Davao Occidental in April 7, 2022.

During the awarding, PENR Officer Chamberlain Babiera discussed the Priority Thrusts and Programs of the DENR which include Improved Land Administration and Management. It works on the disposition of Alienable and Disposable land of the Public Domain to qualified owners, thus, the conduct of the said distribution of land titles. Babiera further encouraged the residents to apply for titles on their lands and introduce improvements according to their land uses.

The DENR remains true to its desire to alleviate poverty in the country. Through the Handog Titulo Program, it speeds up the processing and issuing of public land patents to qualifying recipients which is likewise a heightened effort to make government services accessible to the public.

It is also in support to President Rodrigo Duterte’s words on one of his distribution of land title activity engagements- “To our hardworking farmers: You are no longer just tillers. You are now proud owners of your own land. I also encourage you to continue your noble duty of tilling our fields and bringing food on the table of every Filipino.”