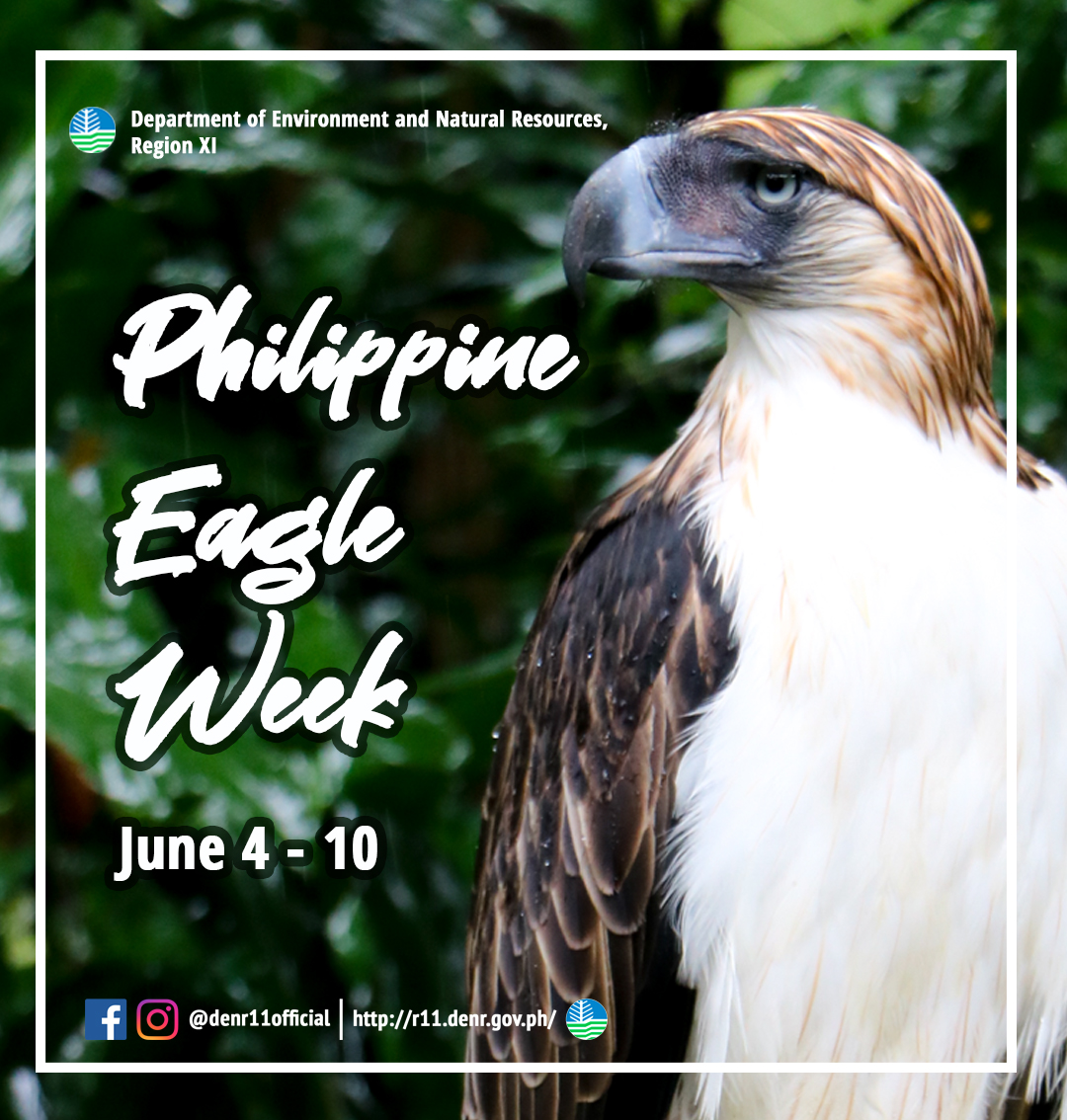 June 4-10 is the country’s Philippine Eagle Week celebration in virtue of Proclamation No. 79, s. 1999 which intends to instill to the Filipinos the importance of Philippine Eagle, not just being a national bird but as a biological indicator of forest ecosystem.
The declaration also pushes for the intensive conservation of these majestic bird of prey .

As the world currently combats the Covid-19 pandemic, the Philippine Eagle Foundation (PEF) puts the spotlight on the conservation frontliners who are continuously taking care of the raptors while enduring the crisis. Them whose efforts are immeasurable to protect the “King of the Forest” will be acclaimed.

To refrain from the usual public exhibition, PEF, through their Philippine Eagle Foundation (Official) page, has lined-up a week-long of digital activities instead for everyone to participate.

On the other hand, the DENR banners this year's celebration with the theme "Pangangalaga ng Buhay-Ilang at Kagubatan, Kalusugan ng Mamayan."

“White Bats”, What could it be? 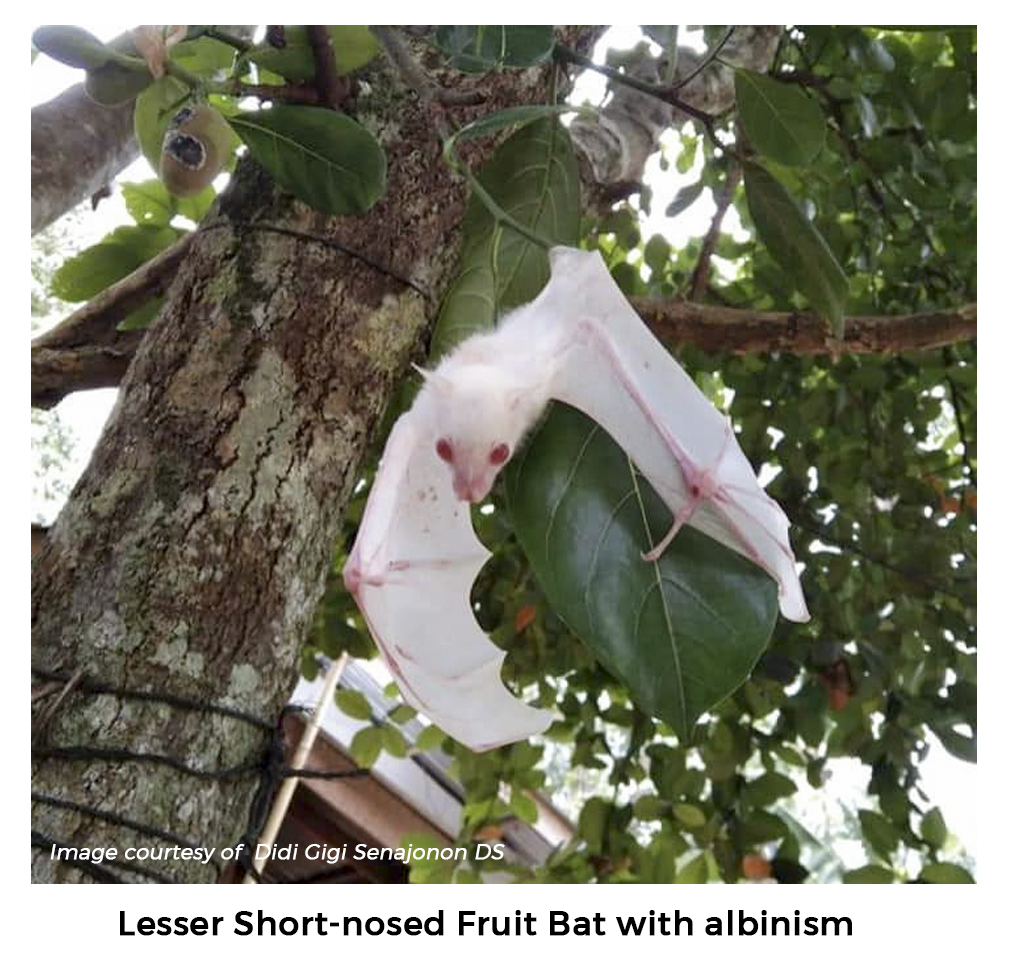 Recently, the fascinating island of Samal in Davao del Norte was even more tagged as wondrous when an unusual kind of bat was seen hanging on a fruit tree. Unlike the other common bats, its hair and wings were white while its eyes, nose, mouth, and bones were pink. It was rare indeed. In fact, its rarity made a fleeting widespread in social media.

The said white bat is a Lesser Short-nosed Fruit Bat or 𝐶𝑦𝑛𝑜𝑝𝑡𝑒𝑟𝑢𝑠 𝑏𝑟𝑎𝑐ℎ𝑦𝑜𝑡𝑖𝑠. Like all the other bats, these species are usually brown and black. But due to a genetic anomaly called albinism, its melanin production is altered causing their white appearance. This is due to a series of genetic mutations and is most likely passed from its parents.

Despite the rare color aberration, the albino fruit bats are among the thousands of bat species around the world that hold a significant ecological role. In fact, they are one of the key players in the restoration of our forests that have gone through destruction. Through their affinity for several plants and the ability to disperse seeds in the vast land of our forests, trees can grow again. No wonder they are tagged as the “farmers of the forest”.

As much as these bats rely on plants’ fruits and flowers to survive, around 500 plant species also depend on them to pollinate their flowers. These include bananas, mangoes, peaches, guava, agave, and many other fruit trees.

In Davao, there is no durian as a banner if not for these fruit-eating bats.

Though not endemic in the Philippines, it is among the other oriental countries such as Sri Lanka, Thailand, Southern China, Sulawesi and Borneo where these fruit bats are habituated.

Samal Island is among the areas in Davao Region that has diverse and extensively wealthy natural resources making it the “home” of choice to various wildlife species, including bats.

Bats are among the wildlife species that are protected under the RA 9147 or Wildlife Resources Conservation and Protection Act. It means that if they are intently harmed or killed, it is punishable by law.

Our wildlife species are of great importance to our biodiversity, more so to our survival. If we do not make an unnecessary intervention on them, they sure won’t cause havoc on us either.

Tarsier sighted yet again in Davao 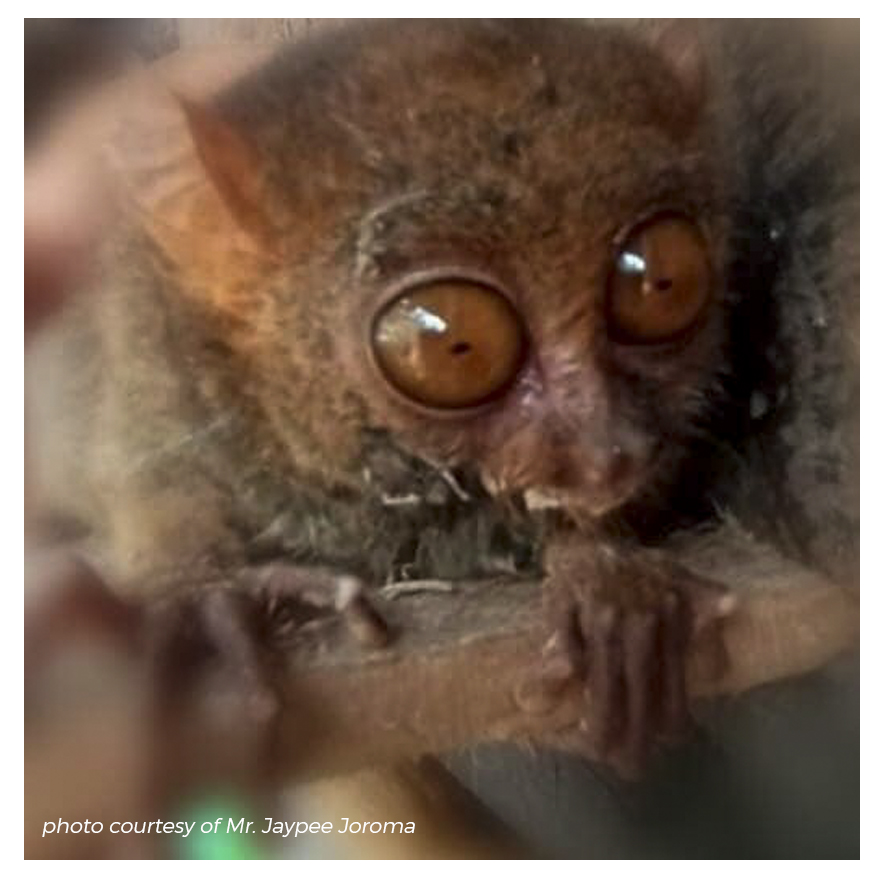 Another Philippine Tarsier was recently sighted in a farm near a school in Megkawayan, Calinan, Davao City. According to a school teacher Jaypee Joromat, it is not the first time that they have spotted these primates in their yard.

As tiny as the size of an adult palm, Philippine Tarsier is one of the smallest primates in the world with large goggling eyes as its arresting and prominent feature. They are endemic to a few areas in Visayas, exacting in Bohol. But over the years, frequent sightings of these tiny primates suggest that they also found a home in Mindanao, one of which is Davao region.

Experts are yet to conclude on the characteristics and distinctions of the Mindanao Tarsiers from those of other areas. For research and conservation purposes, we earnestly call the public to not possess, trade, harm or even touch these primates.

To date, Philippine Tarsier is listed as nearly threatened species and, if not conserved, may lead to extinction. Threats to their descending population include low birth rate, loss of habitat and as aforementioned, human intervention.

Again, may we remind the public that if a Tarsier is in sight, do not touch it unless necessary. If found displaced, you may release it back to the wild while handling it delicately. As Tarsiers are nocturnal, avoid taking photographs with flash as this will frighten them. If otherwise injured, call the assistance of the authorities.

Philippine Tarsier is ours as pride, also ours to conserve.

To continue to equip the employees of the Department of Environment and Natural Resources-XI with a deeper understanding of the Department’s mandate, programs and the different environmental laws being implemented, DENR-XI is currently conducting its 2nd Frontline training course held at the Royal Mandaya Hotel, Davao City.

This training course, which will run from February 27 to March 2, 2020, is in line with DENR Secretary Roy A. Cimatu’s goal to strengthen DENR’s Provincial and Community Environment and Natural Resources Offices (PENROs and CENROs) as they are the Department’s frontliners in terms of implementing its programs and execution of different environmental laws. This is being participated in by 40 employees from DENR-XI’s PENROs and CENROs.

In her message, Assistant Secretary for Field Operations-Eastern Mindanao and DENR-XI Regional Executive Director Ruth M. Tawantawan reminded all the learners to practice good governance and to try their utmost best to be role models both to their colleagues and in their communities by being efficient and effective employees of the Department.

On the other hand, with the aim to re-orient the participants on DENR’s organizational structure and core values, Assistant Regional Executive Director for Management Services Atty. Ma. Mercedes V. Dumagan discussed to the learners about the Department’s mandate, vision, mission and priority programs of President Rodrigo R. Duterte and DENR Secretary Roy A. CImatu.

A total of 31,892.54 board feet of confiscated forest products were donated by the Department of Environment and Natural Resources (DENR) Regions 11 and 13 to the province of Davao del Sur last January 30, 2020.

It can be recalled that DENR Secretary Roy A. Cimatu issued a directive to its Mindanao offices last year to release confiscated lumbers to help Mindanao earthquake victims rebuild their homes.

During the signing of the Deed of Donations, DENR Undersecretary for Enforcement and Muslim Affairs Jim O. Sampulna said that the donation of forest products to Davao del Sur is one way of telling the people that DENR’s mission is not only to have a cleaner and greener environment, but it also includes looking at the welfare of the people.

Moreover, Assistant Secretary for Field Operations Eastern Mindanao and DENR 11’s Regional Executive Director Ruth M. Tawantawan assured the people of Davao del Sur that helping them rebuild their homes is one of the important things that Secretary Cimatu would want to attend to.

“As Secretary Cimatu is committed to have a DENR that gives high quality of service to the people, we are extending whatever assistance we can give especially to those communities who were affected by the devastation caused by the earthquake incident.”

Davao del Sur Governor Douglas RA. Cagas expressed his gratitude to DENR for the help they have extended in rebuilding the homes and lives of the earthquake victims.

“It’s painful to see the destruction caused by the earthquake that’s why I am very thankful to the DENR for donating these confiscated forest products. I know this will not be the last for I know they are really committed to help,” he said.

Cagas revealed that there were 9,000 homes in Davao del Sur that were totally damaged and 30,000 homes that were partially damaged. Mayors from the different municipalities of Davao del Sur also expressed their appreciation to the DENR for donating the confiscated lumbers to their province. They said they are hopeful that they could immediately start constructing temporary homes for the victims.

Also present during the event is Mindanao Development Authority (MinDA) Chairman Emmanuel “Manny” Piñol who said that Secretary Cimatu immediately responded to LGU’s request for donations of lumbers which they could use for the construction of temporary shelters.

“DENR’s move to donate confiscated forest products to earthquake victims is actually showing to the people that this is a responsive government. We respond to the situation and we adjust our governance,” he said.

On the other hand, DENR 13’s Regional Executive Director Atty. Felix Alicer said that there are no political boundaries when it comes to extending help to the people. “We really want to help rebuild the lives of these earthquake victims in Region XI especially in the province of Davao del Sur. And to extend our help, we have to expand our jurisdiction.”