With its mandate to address environmental issues that contribute to the degradation of the nation’s coastal and marine ecosystems, the Department of Environment and Natural Resources (DENR-XI) is strictly implementing Republic Act 9275 or the Philippine Clean Water Act of 2004 as one of its priorities together with the Clean Air Act and the Ecological Solid Waste Management Act.

With the on-going rehabilitation of Manila Bay, DENR Secretary Roy A. Cimatu said that stricter enforcement of RA 9275 is the key to addressing water quality issues and other environmental problems not only in the historic bay but in all the rivers and other water bodies in the country.

During the recent Pre-SONA on Climate Change event held in Davao City, Cimatu said in an interview that he wants to have communal septage facilities in the city’s coastal informal settlements to help minimize the presence of coliform in the coast.

“As long as the settlers are defecating there, there is coliform,” he said.

In Region XI, DENR’s Environmental Management Bureau (EMB) is tasked to monitor coliform levels in the rivers and coasts through its monitoring stations along Davao River and Davao Gulf.

Assistant Secretary for Field Operations Eastern Mindanao and DENR-XI’s Regional Executive Director Ruth M. Tawantawan said that aside from the regular monitoring of Davao Gulf and Davao River, the Department has also taken initial action in addressing the sanitation of the Davao Gulf as EMB-XI will designate it as a Water Quality Management Area (WQMA) this year.

“The plans of rehabilitating Davao Gulf is part of Secretary Cimatu’s priority in protecting the marine and coastal ecosystem,” Tawantawan said.

Pursuant to Section 5 of Republic Act 9275 known as The Philippine Clean Water Act of 2004, the Department of Environment and Natural Resources (DENR) through its Environmental Management Bureau (EMB) is mandated to designate WQMA.

The objective of the WQMA is to protect, through stakeholders collaboration, the water body and its tributaries by keeping their water quality within the Water Quality Guidelines or Criteria conforming to the water body’s classification or even improve the quality to higher classification. A WQMA Action Plan will be prepared in order to address water quality issues and problems in the area and later result to the improvement or better water quality of the said water body.

“Along with these initiatives, we are also one with the City Government on its plans in establishing sewerage treatment systems in the City. This is one of the City’s projects that we would want to prioritize and to pursue,” Tawantawan added.

This proposal is included in the IM4Davao which is a 27-year Infrastructure Modernization Plans that contains a proposed short, medium and long-term high priority projects for Davao City with an estimated cost of PhP 298.4 billion. At present, there is an on-going feasibility study for the entire region which is being conducted by the National Economic Development Authority.

The City has already identified 6 sites for the establishment of sewerage treatment facilities. The location of “Area A” that is included in IM4Davao’s priority project is within the vicinity of Magsaysay Park that covers the districts of Poblacion and Agdao.

The plant will serve a population of 370,000 people with a treatment capacity of 100,000 cubic meters per day. 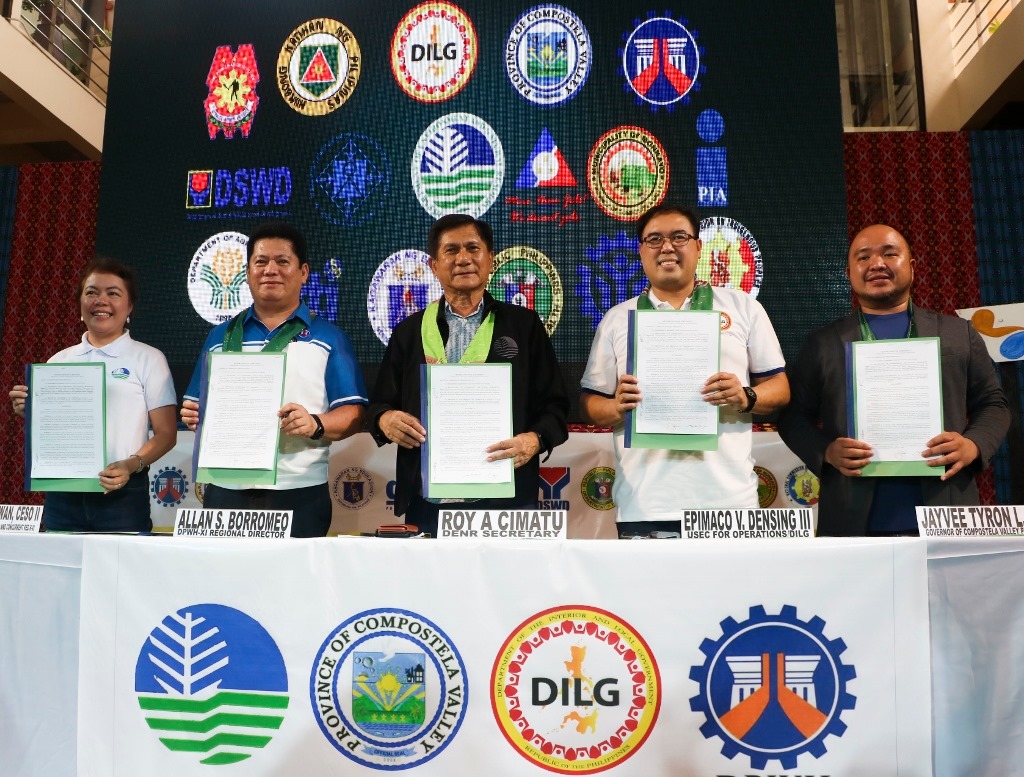 Department of Environment and Natural Resources (DENR) and the provincial government of Davao de Oro signed a Memorandum of Agreement this week for the dredging, quarrying and rehabilitation of Naboc River in Monkayo.

The rehabilitation of Naboc River is one of the priority programs of Secretary Cimatu after President Rodrigo Duterte stated in his SONA last July 2017 the ill condition of the river caused by Mercury, Cyanide and fecal coliform contamination.

"Mt. Diwalwal had been the debris of man's insatiable greed and we will not allow this river to die and we will exhaust all means to bring it back to life as what we have successfully done in Boracay and what we are doing in Manila Bay," Cimatu said during his message.

Assistant Secretary for Field Operations Eastern Mindanao and DENR-XI Regional Executive Director Ruth M. Tawantawan said that it is very fulfilling to have delivered the mandates and challenges of the President and the DENR Secretary.

"The resolution of this long-overdue problem is a clear manifestation of Presidents Duterte's political will for change. And with the issuance of Secretary Cimatu's Special Order for creating the Provincial Task Force Naboc River coupled with his strategies, stipulated an impetus potent enough to reach an effective solution," she said.

On the other hand, Governor Uy vowed to help in cleaning the Naboc River and restore its natural waters.

"As the Governor, I will fully commit my time, my effort and my passion to clean-up this Naboc River and support the advocacy of the DENR and the President as well," Uy said. 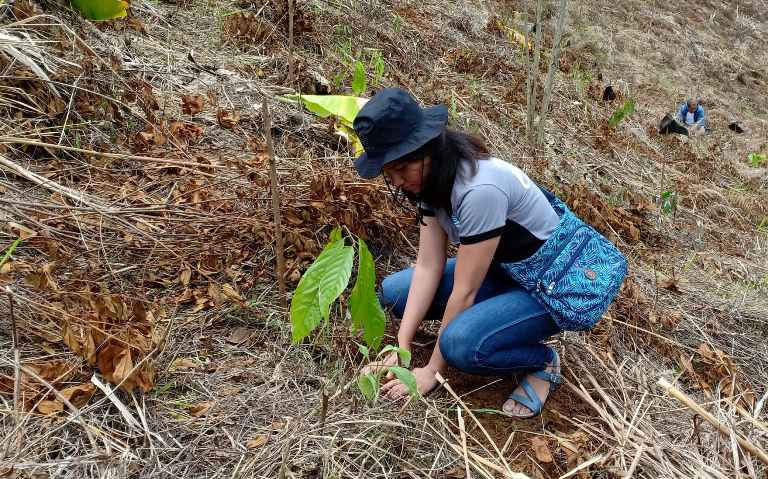 Said participants are also members of the Society of Filipino Foresters, Inc. (SFFI).

In the Philippines, Arbor Day was declared through Proclamation No. 30 by former President Manuel Roxas in 1947, to be held every second Saturday of September of each year in schools and communities. Most recently, it was revived through Republic Act 10176 or the Arbor Day Act of 2012 when President Benigno Aquino 3rd signed into law a bill reviving tree-planting day as a yearly event.

Arbor Day in the Philippines has been institutionalized to be observed every June 25 of each year by planting trees, ornamental plants and other forms of relevant activities.

Arbor Day, which comes from the Latin word “arbor” meaning tree, is a holiday in which individuals and groups are encouraged to plant and care for trees. Participation of all government agencies, including government-owned and controlled corporations, private sectors, schools, civil society groups, and the citizenry are enjoined.

June 4-10 of every calendar year is the Philippine Eagle Week, a celebration pursuant to Proclamation No. 79 which aims to strengthen public awareness on the significance of the country’s iconic bird of prey and the majestic predator in the wild- the Philippine Eagle.

The Philippine Eagle Foundation (PEF) and the Department of Environment and Natural Resources (DENR-XI) recently conducted a community celebration in Brgy. Baracatan, Toril, Davao City as an innovative effort in educating the public about the endemic eagle.

Both agencies believe that one of the best ways to ensure the conservation of the environment, including its species, is to engage and educate the community, most especially the children.

“Let’s cultivate the children to be stewards of the earth. Let’s involve them now because these young people represent the future.” Mryna Erlinda Arbiol, DENR XI’s Chief, Conservation and Development Division emphasizes.

The information drive aims to refresh everyone about how much we take pride having the most revered and most powerful bird there is in the wild. Along with these prideful facts is making them aware that the iconic eagle is also critically endangered which means that they have a narrow chance to survive if we will not take care of them.

One of the presenters was Mr. Ric Obenza, Jr, an environmentalist, artist and 2018 Datu Bago awardee who relentlessly ignites children’s ideas about nature in an artistic way. Mr. Obenza dedicates his time in planting trees daily and encourages the children and the community to adopt the same habit.

“Planting trees will lead to having a healthy forest. This means, we protect our Philippine Eagle’s home.” Obenza explains to children.

The day-long activity culminates by gathering the students and the community for a story-telling and film screening of “To Save our Eagle” a special documentary about the Philippine Eagle’s plight.

“We have to enrich the children’s values towards conserving our environment. They also have to realize environmental matters that transcend their classroom walls.” Marigelaine Arguillas, DENR-XI Protected Areas Management and Biodiversity Conservation Section Chief asserts. 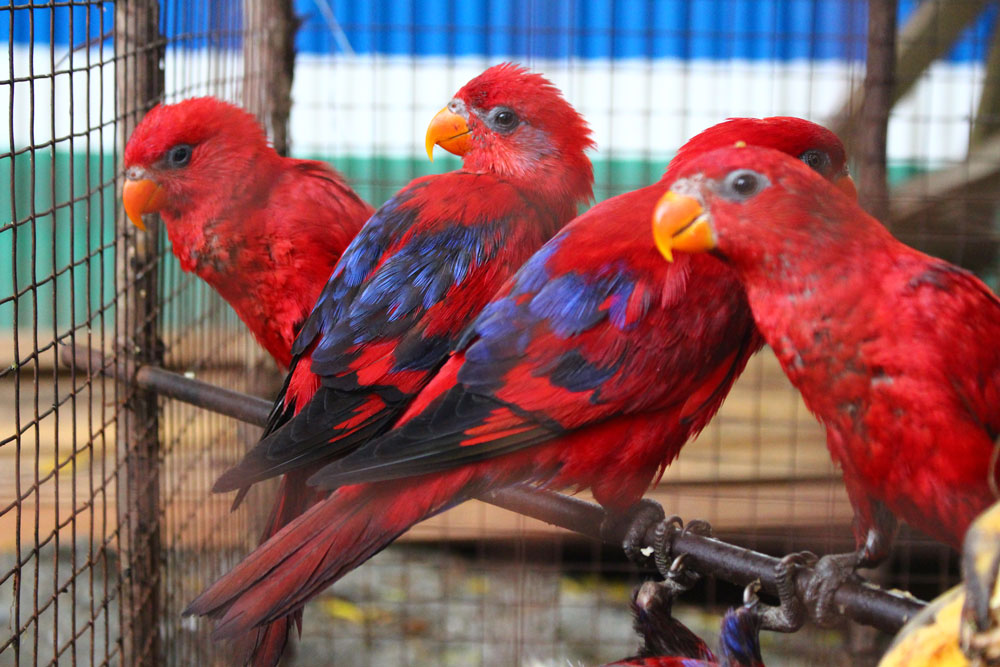 A team from the National Bureau of Investigation, Department of Environment and Natural Resources, Philippine National Police and the Philippine Army seized different kinds of exotic animals last April 8, 2019 in Barangay Dahican, City of Mati, Davao Oriental. This wildlife, mostly birds, were said to have come from Indonesia and Papua New Guinea.

Two men, who are allegedly caretakers of the wildlife, were also arrested during the buy-bust operation headed by the NBI.

Accordingly, the apprehended wildlife species were already at the area for about a week and that the caretakers were being paid to feed them.

A total of 450 species of birds, mammals and reptiles were identified and counted by the team from Biodiversity Management Bureau (BMB), the DENR Regional Office and DENR Provincial Offices in Mati. The apprehended wildlife animals have an estimated international value of 50 million pesos and local value of 8 million pesos. Most of these species are categorized as endangered based on the Convention of International Trade in Endangered Species (CITES).

On the other hand, the NBI through its Environmental Crime Division-Investigative Service has filed charges, recommending for prosecution of the two arrested wildlife smugglers. The two will be charged for possessing and selling endangered wildlife animals in violation of Section 27 of Republic Act No. 9147 or the Wildlife Resources Conservation and Protection Act.

Assistant Secretary for Field Operations Eastern Mindanao and Regional Executive Director Ruth M. Tawantawan commended the team for its successful operation and said that the Department will continue to be vigilant in curbing illegal trading of wildlife.

“Rest assured that under Secretary Roy Cimatu’s watch, the Department will always be on the guard in curtailing wildlife trading as we are committed to safeguard wildlife species, both flora and fauna, most especially if these species are considered critically-endangered or endangered,” she said.