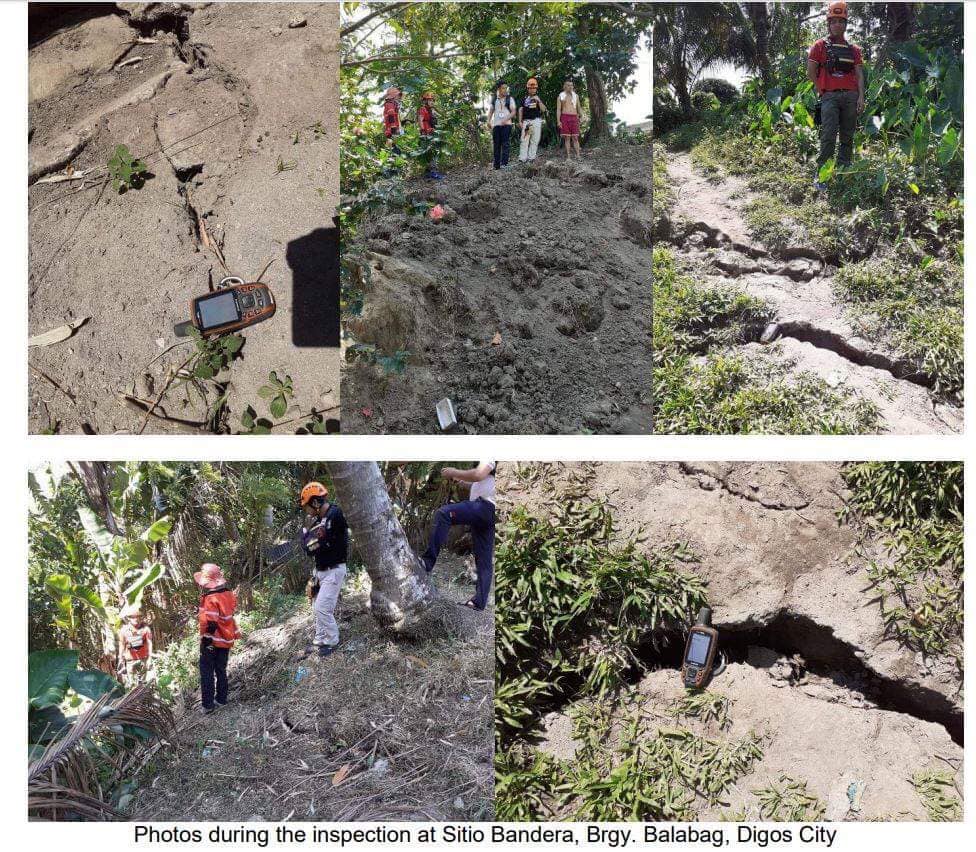 Landslides, tension cracks, slumps, rocks rolling downslopes were among the findings of the on-going monitoring and assessment of the areas affected by earthquake that consecutively occurred in October 16, 29 and 30, 2019 in Mindanao.

In So. Marawer, Purok Tagumpay 2, Brgy. Kapatagan, an approximately 250 meter-length tension cracks was observed. It has a crack opening ranging from 1 inch- 5 inches and with a maximum vertical displacement of 5 inches. It was accordingly caused by 6.3 magnitude earthquake in October 16 and was aggravated during the 6.6 magnitude earthquake in October 29. It was recommended that the affected houses will be immediately relocated since the area is highly susceptible to landslide.

In Purok Talisay, Brgy. Kiagot, there were reported cases of rock rolling downslope. Loose cobble to boulder-sized volcanic rock fragments were observed along the slope. The MGB team recommended for conduct of further assessment and for the relocation or temporary evacuation of household directly situated in the area as it is highly susceptible to mass movement.

Series of tension cracks was also observed in So. Bandera, Brgy. Balabag. A slump was further noted with a maximum vertical displacement of 30 cm.

Another landslide was observed approximately 2 kilometers northeast of the Purok Centro. Adjacent to the landslide crown, series of tension cracks were also observed.

Several areas of Brgy. Goma were also affected. In So. Kiola, a tension crack with a vertical displacement reaching up to 45 cm was noted which imposes threat to the 2 houses that are adjacent to it. It was accordingly occurred in October 30 earthquake.

In Purok Alom, So. Nodila, a massive landslide was observed wherein possible debris flow may pose a threat to damming of Napan River.

As the LGU also prioritizes assessment of earthquake impacts in schools, the MGB team surveyed two (2) schools in Brgy. Palma Gil wherein structural cracks were observed. In Gatong Elementary School- Igang Extension, it was remarked for temporary termination of four (4) classrooms and for inspection of proper authorities.

In Gatong Elementary School, aside from the structural cracks on walls, gap between the wall of a classroom to the floor was also noted as well as a vertical displacement on the floor outside the classrooms in its old building. The MGB team recommended for immediate inspection and assessment by the appropriate authorities.

The MGB-XI’s above-mentioned update covers November 7-8, 2019 monitoring and assessment in close coordination with the Provincial Environment and Natural Resources Offices (PENROs), Local/Municipal Disaster Risk and Reduction and Management Offices (L/M DRRMO) and Philippine Institute of Volcanology and Seismology or PHIVOLCS. 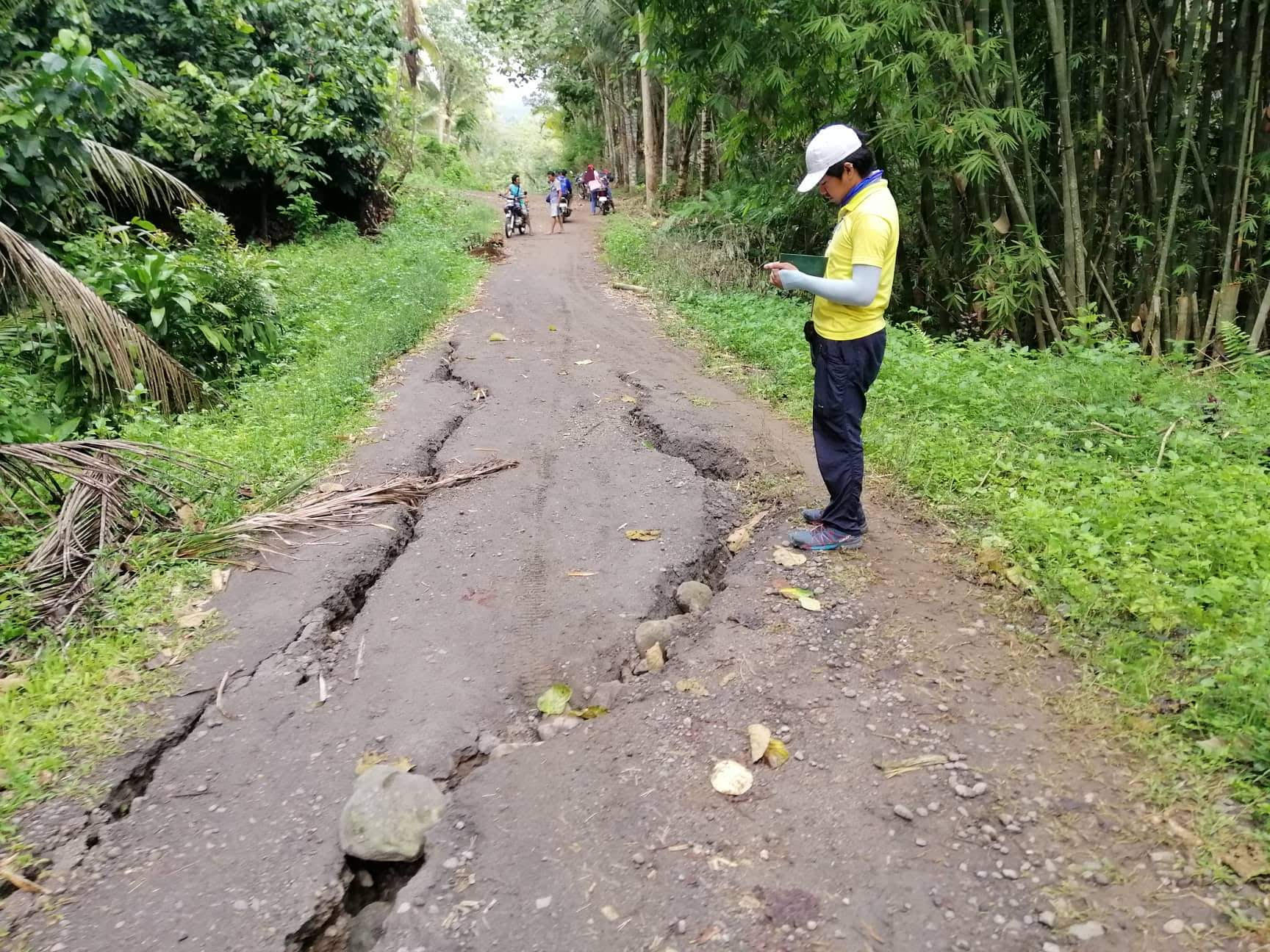 All geologists and personnel embedded in the provincial offices of the Department of Environment and Natural Resources (DENR-XI) are still on the earthquake-hit areas within Davao Region to provide an update on earthquake impact monitoring and assessment.

In Davao del Sur, landslides hit the Municipality of Magsaysay where there are reported casualties in Barangays Upper Bala and Asbangilok. The team also noted tension cracks in some areas and strongly recommended that the affected community should be immediately relocated.

In Davao City, there were occurrences of landslides in Marilog District, Brgy. Mandug, Brgy Buhangin and Catalunan Grande but neither were there casualties nor injuries reported.

In Marilog district, tension cracks and slumps were observed along the barangay road in So. Makatol in Brgy. Magsaysay wherein the team recommended for the immediate relocation of families residing in the area. An old landslide was also noted in Purok Acacia in Brgy. Tamugan with vertical displacement of 10 meters wherein approximately 100 households are located 40 meters near the base of the slope.

An earthquake-induced landslide was also noted in Phase-5 DDF Village along Davao River in Brgy. Mandug, affecting 1 house. Immediate relocation of houses along the riverbank or installation of riverbank protection were some of the recommendations of the MGB team.

"The result and findings of the assessment are furnished to the respective offices for their appropriate action. This is part of the bureau’s disaster-response efforts” MGB-XI Regional Director Atty. Jasper Alberto Lascano stresses.

Further, Environment Secretary Roy A. Cimatu, evaluated the aftermath of the earthquake and bore a call to the LGUs to reexamine MGB’s geological hazard maps with attached recommendations which are issued to their offices to serve as their guide and reference in managing calamitous events.

The Ecosystems Research and Development Bureau (ERDB) of the Department of Environment and Natural Resources (DENR) recently conducted a two-day One Mindanao Stakeholders’ Consultation on Biodiversity Research Agenda held at the Pinnacle Hotel & Suites, Davao City.

The Stakehokders' Consultation is in line with the Department of Science and Technology's (DOST) "Mindanao Biodiversity: One Science Sustainable Development" which is an undertaking that also involves ERDB and the Biodiversity Management Bureau (BMB) of DENR.

The event is participated in by DENR Mindanao Cluster (Regions 9, 10, 11, 12 and the Caraga Region), other national government agencies and academic institutions.

Tawantawan assured the participants that DENR would aid in policy developments, planning, and decision-making through its science-based data and information.

She also said that the consultation is part of DENR's advocacy on enhanced biodiversity conservation which is one of the priority programs of DENR Secretary Roy A. Cimatu.

"Through this activity, we can identify common points for further cooperation and collaboration on research and development regarding biodiversity protection. Your participation and support are integral to the crafting of effective policies, actions, and initiatives in biodiversity conservation," she said.

Tawantawan further stressed that this objective is parallel to what President Rodrigo Duterte said during the recent ASEAN Summit held in Thailand of "ensuring environmental sustainability and protecting biodiversity in the region’s pursuit for development.”

One Mindanao Stakeholders’ Consultation on Biodiversity Research Agenda is in compliance to Section 38 and 40 of the 2017, 2018, and 2019 General Appropriation Act which states that all agencies of the government shall ensure that protection of biological diversity is integrated and mainstreamed into the development programs and projects of concerned agencies and institutions.

KIBLAWAN, DAVAO DEL SUR- Based on the continuous monitoring and assessment of DENR's Mines and Geosciences Bureau (MGB) XI, there’s a threat of flashflood occurrence along the Bugac River in Brgy. San Jose following the successive strong magnitude earthquakes in Mindanao.

To prevent the occurrence of possible disaster, a meeting between the Department of Public Works and Highways (DPWH) XI, Local Government Unit (LGU) Kiblawan, Office of the Civil Defense (OCD) XI and MGB XI was initiated to make an appropriate plan of action in the excavation of the river damming.

The said river damming was attributed to the earthquake-induced landslide wherein debris material was deposited along the river channel causing blockage of the river flow.

“This resulted to the accumulation of surface water in the upstream side of the river with an approximate depth of 8 feet. The excavation will prevent the occurence of flashflood." said Beverly Mae Brebante, MGB XI's OIC-Chief, Geosciences Division.

MGB XI Regional Director Atty. Jasper Lascano further says that the bureau has been issuing landslide and flood threat advisories prior to the earthquake and strongly recommended to the Barangay Local Government Unit to advise its affected constituents to initiate readiness and measures.

"Currently, the MGB-XI is in close coordination with the RDRRMC, Local DRRMOs, LGUs to provide necessary support with regards to the geological hazards that the recent earthquakes may have caused." RD Lascano assures.

The Mines and Geosciences Bureau (MGB-XI) of the Department of Environment and Natural Resources is currently monitoring all earthquake-hit areas within Region XI, giving assistance to the Provincial, Municipal and City Disaster Risk Reduction and Management Offices (P/C/M DRRMOs). Landslide assessment is also being conducted on areas that were affected by the series of earthquakes.

For the month of October, Mindanao has been experiencing a series of high magnitude earthquakes ranging from 6.1 to 6.6 with its epicenters located in North Cotabato and Davao del Sur. As of last week, all embedded personnel and focal persons of MGB-XI were dispatched and instructed to assess their respective areas of responsibility (AORs) and to closely coordinate with P/C/M DRRMOs.

"We are still monitoring these earthquake-hit areas as tremors may increase the likelihood of rain-induced landslides during heavy rainfalls, specifically since PAGASA has issued weather advisories for Low-Pressure Areas (LPAs) in Mindanao Region embedded in the Intertropical Convergent Zones (ITCZ)," he said.

Last October 19, an ocular inspection was immediately conducted in Magsaysay, Davao del Sur due to the landslide incident thereat wherein 40 houses are located near the area. As of this writing, the team is conducting an assessment in the said area and will also assist the LGUs in assessing evacuation and relocation sites.

In Davao City, aside from structural damages on buildings, cracks were also noted along the road in Baganihan, Marilog District. The MGB-XI Team together with CDRRMO has also conducted monitoring and assessment of high residential areas in the city.

Meanwhile, MGB-XI’s Mine, Safety, Environment and Social Development Division has also instructed all mining companies to immediately submit assessment reports of their respective tenement areas as regards to the series of earthquakes.

"Currently, all the technical personnel from MGB-XI’s Geosciences Division are in full alert and are on call 24/7. And to cater to all concerns and inquiries from the citizens, they can call the MGB-XI Operation Center at 082 224-1536," Lascano said.

MGB-XI is also issuing Geohazard advisories from time to time.