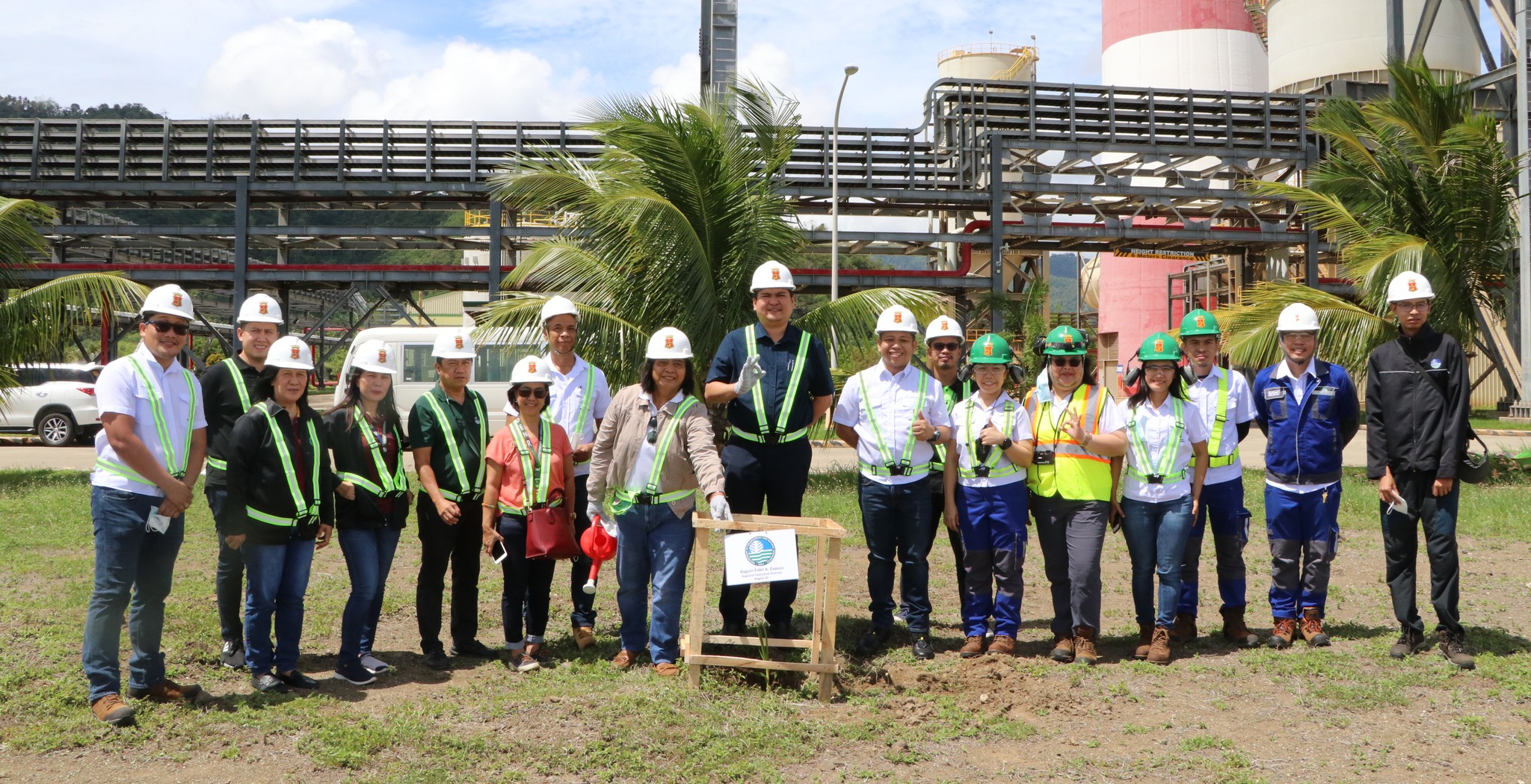 Heading towards further mutually beneficial mergence, the DENR XI, through the running of RED Bagani Fidel Evasco conducted a site visit at San Miguel Consolidated Power Corporation (SMCPC), the energy arm of San Miguel Corporation, in Malita, Davao Occidental and had a dialogue with its officials.

The director aimed on taking a look on the environmental compliance of said energy and power conglomerate to which, the officials readily concurred. With the top officials of PENRO Davao Occidental, the DENR team was toured around SMCPC’s 300 MW Malita Power Plant with Circulating Fluidized Bed Technology.

Site visit on plants and other business establishments is one of the periodical activities of the DENR XI to ensure that their operations conform to the environmental laws and regulations.

Frontliners of the country’s ASEAN Heritage Parks (AHP) including AHP Managers, AHP partners and key stakeholders, the Governing Board, ASEAN Working Group on Nature Conservation and Biodiversity (AWGNCB) Members and AHP Committee Members recently gathered for a 4-day conference in the Republic of Indonesia.

Besides strengthening network and camaraderie, conservationists were positioned to assess the role of AHPs in ecosystem protection and pandemic recovery though enhanced knowledge and skills on planning and implementing ecosystem management, restoration strategies and building resilience.

Attendees from the Philippines include DENR’s Protected Area Superintendent (PASu) and selected personnel and stakeholders who are in the forefront of ensuring that the management of the country’s Heritage Parks are on the beam.

For. Rolly Tapec, the OIC-PASu of Mt. Hamiguitan Range Wildlife Sanctuary stood as a resource speaker on the Impact of COVID-19 Pandemic and Recovery Plan in Philippine AHP.

For. Daryl Jane Bordios of MHRWS also shared her exprience to which she emphasized that such conference enhanced her knowledge and points of view.

"I am deeply honored and humbled as I got the chance to learn from other countries' conservationists.", For. Bordios expounds.

“As a stakeholder in MANP, conferences such as this one really helps us improve by learning and adopting replicable models of biodiversity conservation. Personally I have learned a lot, there are principles that I think could be applied in MANP especially on the aspect of ecotourism and conservation.”, Paner shares.

MANP, alongside Mt. Iglit Baco National Park in Mindoro, were declared in 1984, making them the pioneering AHP sites in the Philippines. MHRWS, on the other hand, alongside Tubbataha Reefs Natural Park, are the only two (2) UNESCO Sites in the list of AHPs. Both were recognized in 2014. 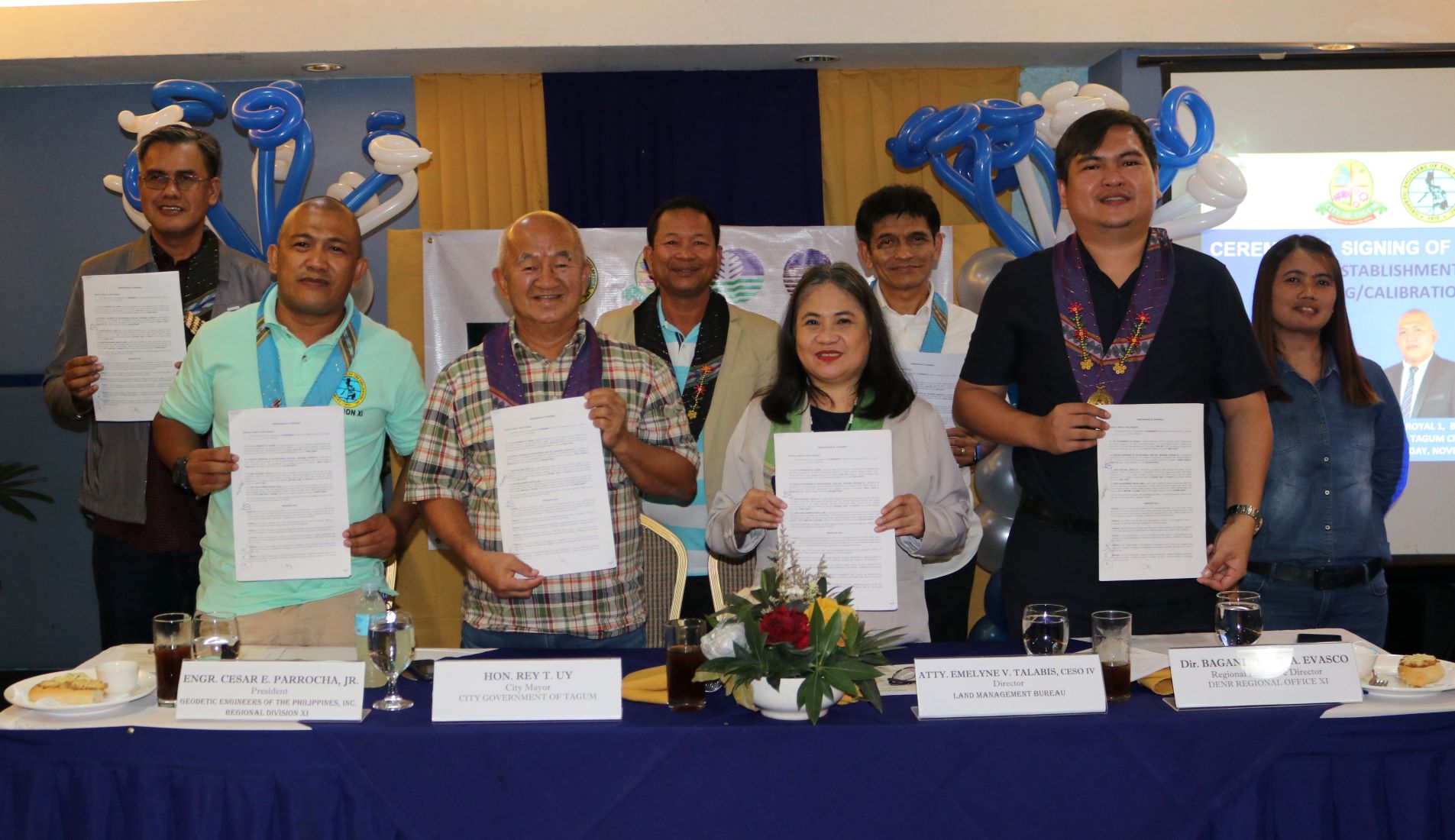 With its aim to provide the public, especially geodetic engineers, in Mindanao and the Visayas a new baseline for the calibration and registration of their surveying instruments, a Memorandum of Agreement was recently signed between the Land Management Bureau (LMB) of the Department of Environment and Natural Resources (DENR), the Geodetic Engineers of the Philippines (GEP) and the City Government of Tagum for the establishment of the Tagum City Baseline.

The proposed site of the said baseline will be at the Energy Park, Barangay Apokon, Tagum, Davao del Norte which will be the first baseline site in the country outside of University of the Philippines in Diliman.

The establishment of Tagum City Baseline is initiated by the Geodetic Engineers of the Philippines (GEP).

Calibration process is testing the instruments used for doing surveys using a baseline, making sure that these instruments will pass the accuracy standard of the LMB. Renewal of calibration of survey instruments is every 2 to 3 years.

Land Management Bureau Director Atty. Emelyne V. Talabis said that the MOA signing for the establishment of Tagum City Baseline is a very important accomplishment of the DENR, being the second spot of establishment next to UP Diliman.

“We therefore aim to establish baselines in other parts of the country, probably in every region and we will work hard to achieve this. Currently, we are already identifying other sites like in General Santos City and we are hoping that we can identify more areas for our baseline establishments,” she said.

Director Talabis also said that the baseline establishments are part of the government’s thrust to make the services accessible to the public and also pursuant to the mandate of the LMB which is to issue regulations, guidelines and standards on land services.

“Last March 16, 2022, we have issued Lands Memorandum Circular 2022-004 which prescribe the guidelines for the establishment of baselines for testing and calibration of surveying instruments,” she added.

On the other hand, Tagum City Mayor Rey T. Uy expressed his appreciation to the DENR for choosing Tagum City as the second baseline being established in the country. He emphasized that with the establishment of the new baseline, it will also help address the issues on overlapping and encroachment of land titles.

“At least with that ordinance, the area will be secured, and it won’t be used for other purposes,” he said.

Moreover, DENR-XI Regional Executive Director Bagani Fidel A. Evasco said that establishing a baseline in Region XI is very advantageous to Geodetic Engineers and other suppliers of the instruments in Mindanao and Visayas because there is no need for them to go to Manila to calibrate their instruments.

“This is very significant especially when we need to be accurate and be precise on our surveys, basing on the standard guidelines of the LMB,” he said.

For their next step, Director Talabis said that the workforce of DENR-XI’s Surveys and Mapping Division (SMD) will be trained to become responsive to all the needs of Geodetic Engineers and suppliers of instruments.

“I really take pride in having this milestone and this will not be realized without the help of the Geodetic Engineers of the Philippines of Region XI, the City of Tagum and DENR Region XI.

A DAY AT THE PUJADA BAY 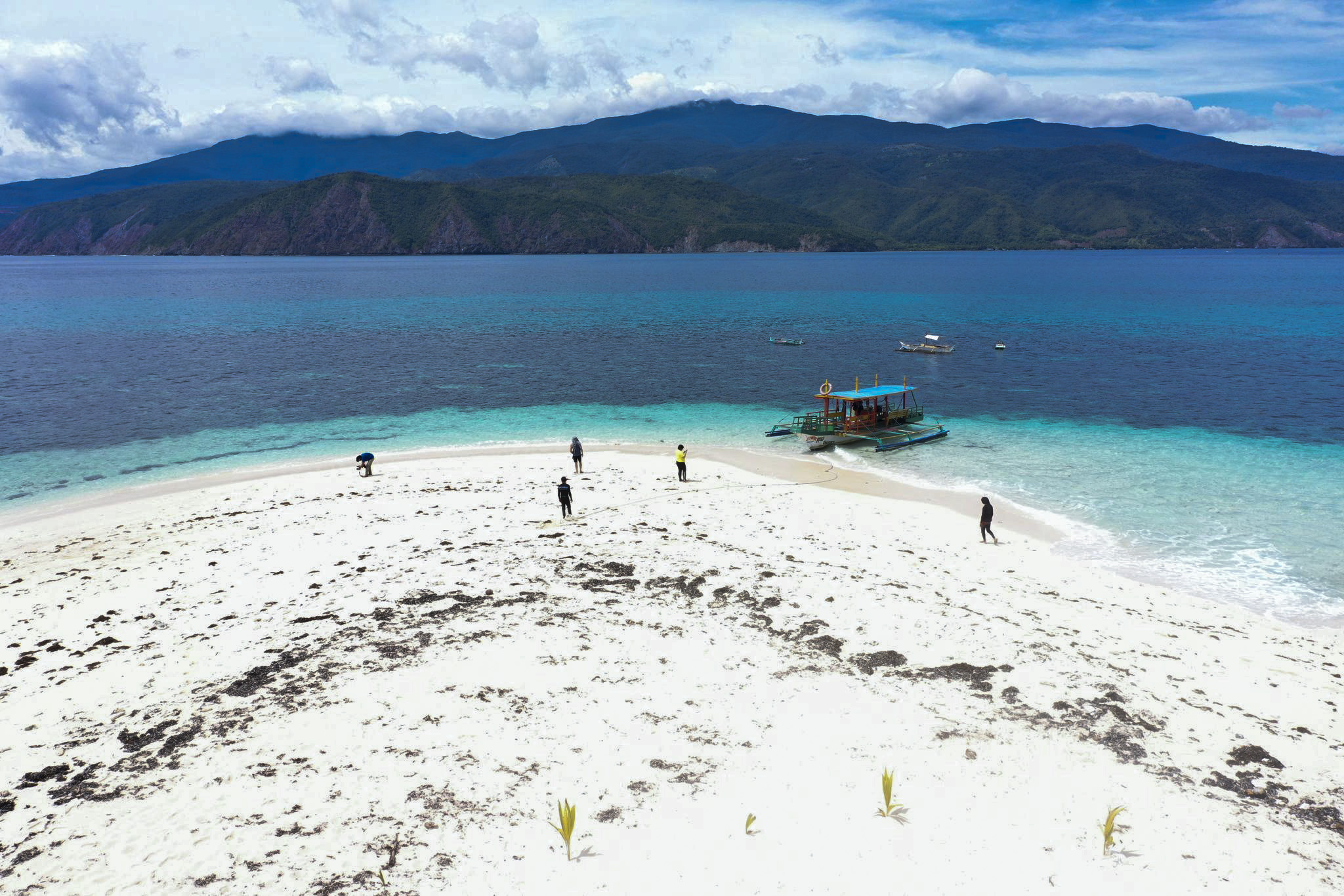 Pujada Bay Protected Landscapes and Seascapes (PBPLS) is one stunning body of water berthed in the naturally well-favored place when it comes to having touristy bays and beaches- Mati, Davao Oriental.

This 20,887-hectare breezy bay is dotted with islands, islets, sandbars and mangrove forests and are all recognized as protected landscapes and seascapes under the National Integrated Protected Areas System (NIPAS) by virtue of Presidential Proclamation No. 431 in 1994.

To ensure the sustainability and protection of its highly valued natural biodiversity, it was likewise reinforced by Republic Act 11038 or the Expanded National Integrated Protected Areas System Act of 2018 (E-Nipas) that was approved by then President Rodrigo Duterte.

All these legal protections are due to the bay’s “national significance characterized by the harmonious interaction of man and land while providing opportunities for public enjoyment through the recreation and tourism within the normal lifestyle and economic activity of these areas.

PBPLS is under the supervision of the Protected Area Management Board (PAMB), a regulatory body that is chaired by the DENR Regional Executive Director. It is to ensure that said bay remains sustainable and preserved through allocating spatial uses which include the buffer zone, strict protection zone, ecological tourism, and multiple use zones.

With its invigorating feels brought by its calm and emerald waters, lofty limestone pillars, hollow caverns and stunning islets with fine-grained sandbars, it is no wonder that PBLS is among the Most Beautiful Bays in the World (MBBW), an impressive recognition that remarkably took place during the 15th World Bays Congress in Toyama Prefecture, Japan, held last October 2019.

Cruising within this bay is an experience worth-having as you get to see the surreal beauty of nature, the colorful and ecstatically abundant marine community, and you know, you get to really live a day of your life.

So, if you haven’t yet, this is your sign. Spend a day at the Pujada Bay. Otherwise, if you’ve been to this beautiful bay, do share your snaps! 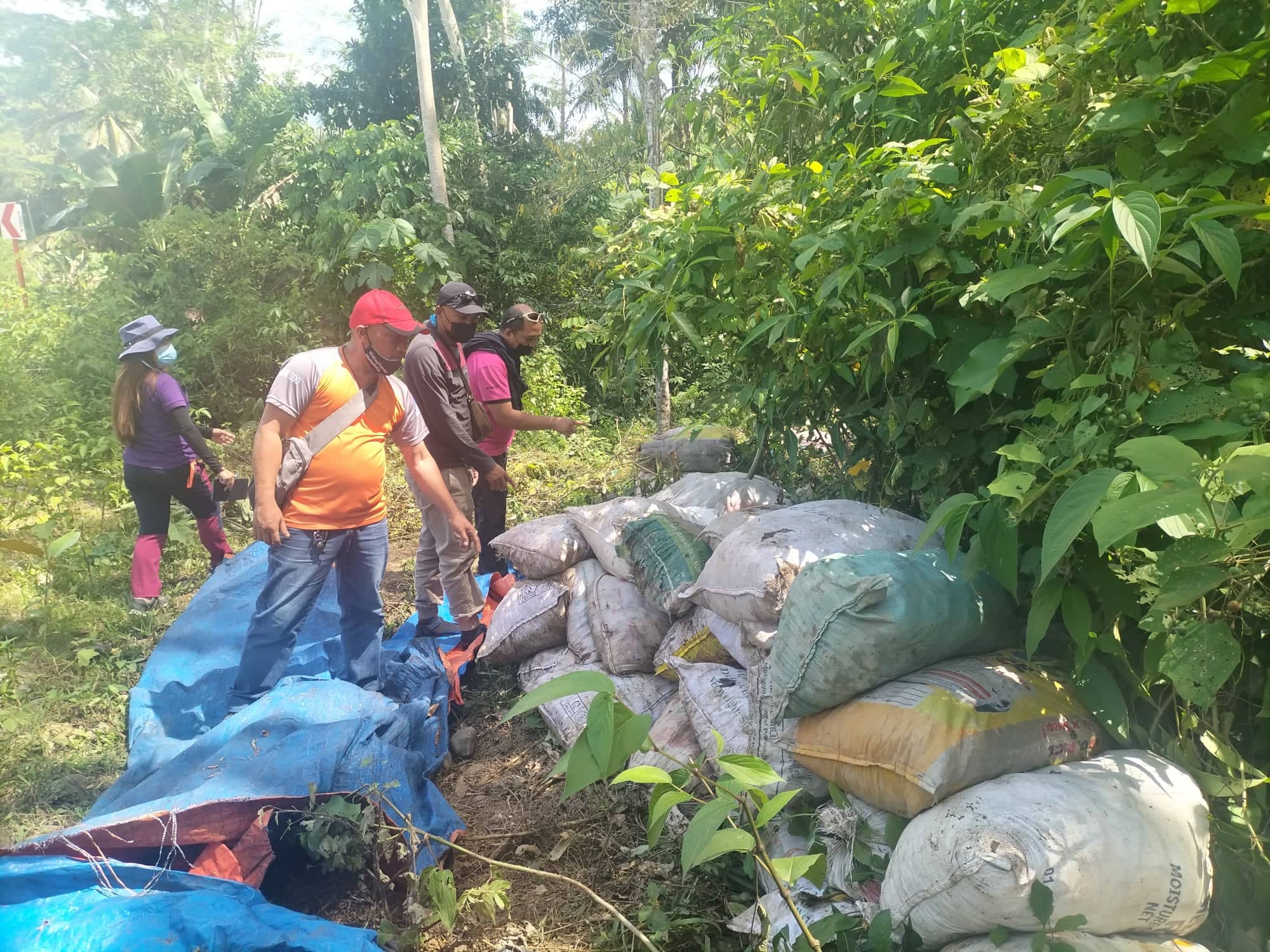 Through a phone call made by a concerned citizen, 68 sacks of piled and abandoned guano deposits in Brgy. Casoon, Monkayo, Davao de Oro were apprehended and seized by technical personnel of DENR XI’s CENRO Monkayo together with the Punong Barangay Of Casoon, Hon. Anastacio Esguerra in early September of this year.

Upon actual ground inspection and verification, it was found out that the guano deposits that were abandoned along the road were sourced from Combilan Cave located in Purok 6, Barangay Casoon.

Said illegal extraction of guano deposits has violated section 7(b) of the Republic Act No. 9072. Anyone found guilty of this act is punishable by imprisonment from at least two (2) years or a fine of atleast Twenty thousand pesos (P20,000) or both at the discretion of the Court.

It has also violated the Republic Act No. 7942 (Philippine Mining Act Of 1995) and the Department Administrative Order (Dao) No. 2010-21 an act instituting a new system of mineral resources exploration, development, utilization and conservation. If found guilty, the violator shall be liable to pay damages and compensation for the minerals removed, extracted, and disposed of, on top of the imprisonment and fines imposed on the culprit.

The DENR is the lead agency which is mandated to manage, protect and conserve the caves and cave resources in country. Any alteration, extraction and collection of our cave resources without permit is prohibited and is against the aforementioned laws.

While resolving the case and halt the occurrence of said violations, the DENR has been intensifying its conduct of Communication Education and Public Awareness on RA 9072 and R.A. 7942.

This office appreciates the help and cooperation of the public when it comes to conservation of our natural resources.

For reports, please reach us through the DENR XI hotline- 0967-354-8827 (Globe) or 0947-611-6083 (Smart), email us through This email address is being protected from spambots. You need JavaScript enabled to view it. or drop a direct message to this page.