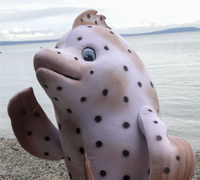 The Department of Environment and Natural Resources (DENR) never ceases to purport strategic ways to campaign in the conservation of the country’s environment and natural resources particularly on its protected areas. Communication, education and public awareness (CEPA) has been wrapped in varied instruments to connect to people and effectively deliver the message on the importance of conserving nature and its biodiversity.

Mascot is one of those tools. Thus, the creation of “Barry”.

“Barry” the barramundi cod/ humpback grouper (Cromileptes altivelis) mascot was designed to educate the people particularly in the spanning community of Mabini, Compostella Valley Province about the abundance of this rare species within the Mabini Protected Landscape and Seascape (MPLS).

The humpback grouper is a pale-greenish brown, black-spotted fish tagged as naturally rare and high priced both in the international and local market- ranging from P 2,000- P3,000 per kilo.

This species, which is now the flagship species of MPLS, shelters in inner shelf reefs found underneath the Mabini waters. Although, its global distribution and population has been recorded as decreasing according to the International Union for the Conservation of Nature (IUCN), their abundance has recently been recorded in the said protected area, which also reflects its “good condition” coral cover.

Through Barry, the DENR aims to open the eyes of the public on the presence of this rare and vulnerable species and the importance of conserving their home – the Mabini waters. Barry will be made visible during conducts of information drive to encourage the community to value the coastal and marine ecosystem and warn them about the consequences that entails illegal activities such as overfishing.