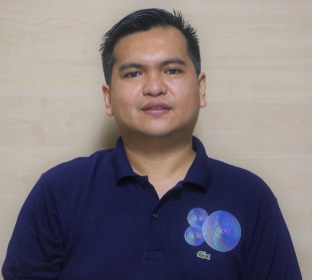 Bagani Fidel A. Evasco is the Regional Executive Director of the Department of Environment and Natural Resources in Region XI (DENR-XI).

Evasco is an Environmental Science graduate at the Ateneo de Davao University with profound knowledge in Marine Biology due to his experience as a licensed Dive Master and Technical Diver. He is a member of the Professional Association of Diving Instructors in Australia, the International Association of Nitrox and Technical Divers in the United States of America, and Project AWARE which is a global movement for ocean protection and marine conservation.

After he graduated from college, Evasco also pursued his dream to become a pilot which propelled him to be a licensed private and commercial pilot at present. He is also a professional underwater photographer and a mountaineer as well as a soccer player and a triathlete. All these passions made him a multifaceted person.

RED Evasco is the son of Leoncio “Jun” Badilla Evasco, Jr., a former Cabinet Secretary and a former Mayor of Maribojoc town in Bohol. He is currently taking up his Masters in Public Administration major in Public Policy at the Ateneo de Davao University.

Details
Category: About Us
Published: 08 October 2019

Davao is said to have derived its name from the word, Daba-daba, a region of flames or fire as recorded in the books of the early Jesuit priests. Some sources say this word is of Bagobo origin which is the name of the sacred brush that belonged to the chieftain of the early Bagobos named Datu Duli who lived in the rolling hills of Sandawa Mountain. As was the custom during the ancient times, the Bagobos kept the fire burning twenty four hours a day throughout the year. And the fire was supposed to be burning at the foot of the Sacred Brush called Daba-daba. It was said that Datu Duli, the Bagobo chieftain was kind and just in his decision over an accused person. Other Bagobos then pronounced the word Daba-daba with the sound of "o" at the end. It was said it had been practiced by Datu Duli when he rendered decisions in settling cases. As time went on the Bagobos of the succeeding generation changed the word Daba-daba to just Daba and added the letter "o" to justify the actuations of Datu Duli in rendering his decisions. Thus the ancient Bagobo word Daba is now pronounced Davao by both native and immigrants.

Some also say that Davao was derived from the name of a Manobo rebel Dabao. Others maintain that the name Dabaw was derived from the word dabahan, a big basin for laundering used by the natives. Still another derivation of the name was form the word daba meaning earthen pot or palayok which the early natives made and sell as their means of livelihood. When mountain dwellers got down to the lowlands the first things they looked for and bought was the daba.

But many native Dabawenyos prefer to believe that Davao derived its name from the great river which the early Tagabawa tribe called Dabu. The Guingans called Duhwow and the Obo called Davoh. Later, the three names given to the river by these early natives were incorporated into what is now DAVAO.

Davao, in its beginning was peopled by different races and groups from different regions and countries. The waves of migration into the Philippines from the Asian countries of Borneo, Malaysia, Indonesia and Persia via Celebes Sea, first landed in Mindanao, then pushed their explorations toward the North. On their way, some of them probably weary and tired from the voyage, settled and lived in Sarangani Island, then later found their way to what is now Davao. Among these groups were the little people known as the Dawn Man of the Australoid Sakai type, Proto-Malays, Indonesian B types of the late Neolithic period. These ethnic indigenous groups are of varied cultures and racial tribes.

During the Spanish Period Davao first loomed in history as a Moro settlement in the banks of Tagloc river (name, pioneer settlers say, given to Davao river by the early Bagobos). But the real history began in 1848 when Don Jose Oyanguren, A Spanish Lawyer-turned-trader sent by the Spanish Governor-General Narciso Claveria, launched an expedition composed of his own Spanish soldiers with their families and volunteers soldiers, defeated the Muslims under Datu Bago.

Christianity was introduce in the Davao Gulf Area when Oyanguren with his group of Spanish soldiers and their families and the native volunteers from Caraga and Surigao settled in Davao in 1848 after defeating the Muslims at the banks of the Davao River under Datu Bago. A priest was sought by the group of Oyanguren to help them build a Christian community in the area since one of the objectives in the conquest was to establish the Christian Religion.

By the time the Americans came to Davao as a new colonial power at the turn of the 20th century, Davao was already peopled by indigenous ethnic tribes found in the interior or hinterland; by Muslim settlers found along the coast of Davao River; by Christian Filipino descendants of Davao's first Filipino Christian settlers in 1848, by Christian Filipino migrants from Luzon and Visayas who migrated to Davao to escape political persecution in their provinces in the late 1800s, by army deserters, by few fugitives, and by the foreign migrants who inhabited the cabecera or town proper.

With long years of existence, full of determination and visionary insights to attain prestige and identity, Region XI, through its struggles, zoomed high like the eagle in the sky.

Details
Category: About Us
Published: 08 October 2019

Details
Category: About Us
Published: 15 June 2016

Details
Category: About Us

Details
Category: About Us
Published: 09 January 2015